HomeNewsSectorsConsumerJumia sees its number of active users jump by half

Jumia sees its number of active users jump by half

The number of annual active consumers (those who have made a purchase during the prior 12 months) using Jumia increased at an annual rate of 51% during the first three months of 2020, to 6.4 million, according to the online retailer’s latest quarterly report.

The total number of orders it received rose by 28% year-on-year (y-o-y), to 6.4 million, during the quarter, while gross merchandise value (GMV) decreased by 11%, to €190 million. It attributed this decline to “the continued effects from the business-mix rebalancing initiated in 2019 [when it shifted towards lower-value goods], as well as the supply and logistics disruption caused by the COVID-19 pandemic.”

It added that “The sharpest GMV contraction was registered in the consumer electronics and mobile phones categories. The fastest growing categories in GMV terms were digital services, which are everyday services, such as airtime recharge or utility bills payment offered via our JumiaPay app, and the FMCG category.” Reckitt Benckiser, Unilever, Procter & Gamble, Nestle, and Coca Cola are among the brands that have partnered with Jumia since March. It has also deepened its relationships with supermarket chains like Carrefour and Kenya-based Naivas.

Adjusted EBITDA loss decreased by 10% y-o-y during Q1, to €36 million, its lowest level in six quarters. Speaking on a conference call, chief financial officer Antoine Maillet-Mezeray commented: “The business mix rebalancing we undertook alongside cost discipline is paying off and driving clear improvement in our unit economics. On average, we have smaller but more profitable orders.”

Co-founder and co-CEO Jermey Hodara noted that “Volume growth was particularly strong in FMCG, which surpassed 80% y-o-y,” with fellow co-founder and co-CEO Sasha Poignonnec noting “a surge in demand for all the essentials starting of course the second week of March.”

Sales volumes were particularly strong in Morocco and Tunisia but weak in Nigeria and particularly South Africa. Poignonnec commented: “We have seen a combination of short-term supply and logistic challenges and positive impacts/unique opportunities for the long-term.”

He added that, in Nigeria, “A lot of our top sellers simply stopped operating for a few weeks, and you can see that since then, part of the sellers have resumed their activities – some partially, some entirely – and volumes have gradually picked up. By the end of April, volumes were almost back to their early March level.” Meanwhile, in Morocco and Tunisia, “Throughout April, we continue to see volumes at least 40% above the levels of early March. And of course, those volumes are also somewhat constrained by the logistic capacity challenges.” 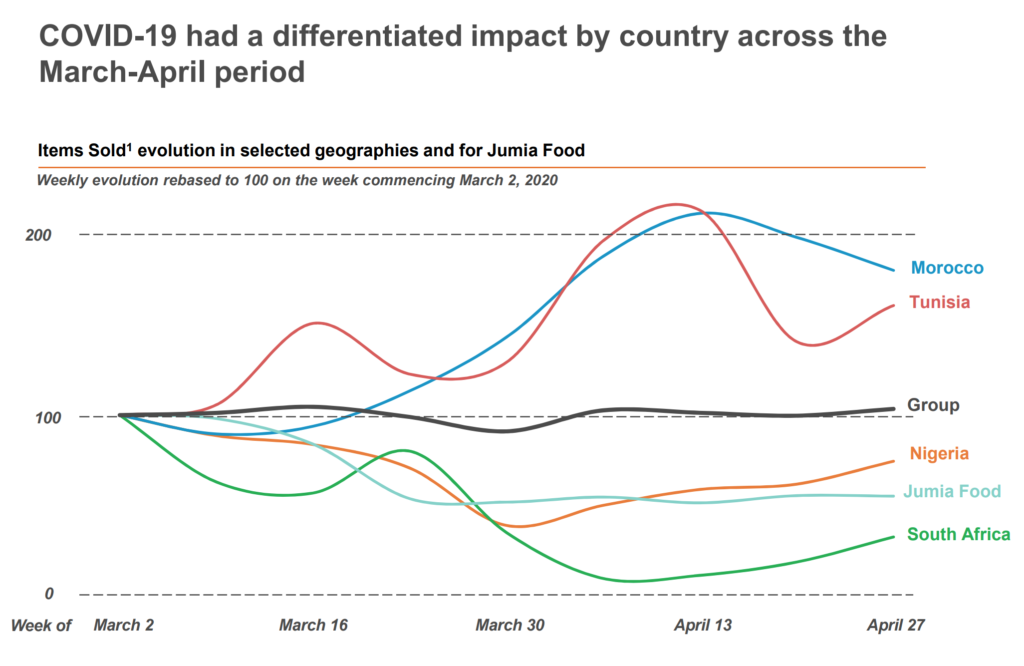 JumiaPay pay grew very strongly in volume and transaction terms during the quarter: Total portfolio value increased at an annual rate of 71%, to €36 million, with the volume of transactions up 77%, as consumers increasingly turned to payment methods that facilitated social distancing.

Jumia burned through a further €41 million during the quarter, leaving it with €191 million of cash available at the end of March, so it may need to raise cash during the next 12 months.

The Sagaci Research View: Consumer attitudes to e-commerce in Africa have been shifting rapidly since the onset of the Covid-19 pandemic – something that is only partly reflected in these results. However, mounting economic pressure, particularly in key such markets as Nigeria and South Africa, will put additional downward pressure on sales, particularly for higher-value items. In this context, Jumia’s pivot towards lower-value goods looks particularly well timed.

Regardless of whether Jumia can hang around long enough to reach profitability (its rate of cash burn remains a major cause of concern), it has done much to establish the viability of e-commerce as a business model in Africa. As a result, this burgeoning market may begin to attract the attention of some larger players, such as China’s Alibaba or Mercado Libre in Latin America (to date, Amazon.com has largely remained aloof from emerging markets) in the medium term.

Still burning cash, Jumia positions itself as an online bridge to Africa
Mitch Slape wants to make Massmart more like Walmart
Tuskys talks up its growth prospects, but can it deliver?
We use cookies to ensure that we give you the best experience on our website. If you continue to use this site we will assume that you are happy with it.Ok